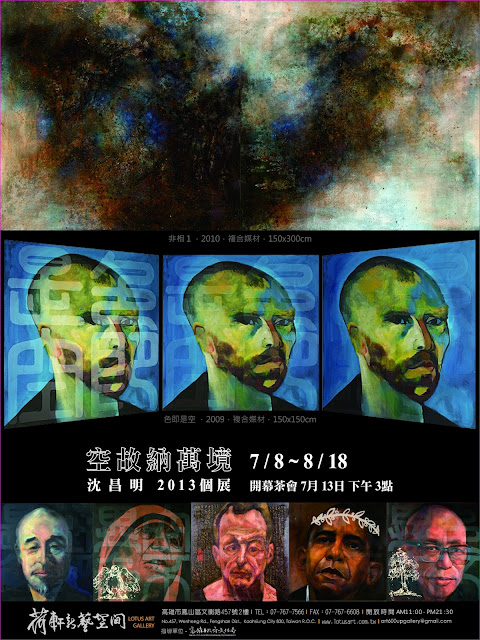 
Catherine Yen
Director of Asian Cultural Council, South 33 Group
Chang-Ming Shen, born in Kaohsiung City, Taiwan, studied fine arts and specialized in sketching in his youth. His easy-going, humble, and self-disciplined nature made him paint many portraits of his relatives, friends, or even strangers and thus establish deep and close friendships with his fellows. In addition to being an adept art collector, Shen once ran an art gallery. His strenuous effort to promote contemporary art has made him widely recognized in painting circles.
As a devout and benevolent Buddhist living like a hermit, Shen transcribes the ‘Heart Sutra’ and plays the ancient Chinese zither every morning. His astute rumination over practicing Laozi’s famous dictum: “Calmness is the leader of restlessness” enables him to create in the darkest moments of his life the paintings in which texts assume greater prominence than images of humans or objects. The texts, which are in the deconstruction form of the abstract phrases and sentences from Buddhist scriptures, are represented through the use of perspective in various or contrasting colors as if they were glowing with the beauty of profundity in the dim distance. The deconstruction painting of texts and images spontaneously liberates what lies deep in one’s heart. Above all, he transcends the boundary between unconsciousness and subconsciousness and enters into direct dialogue with his own inner world and memory just like Wang Huaiqing, who has Ming-style furniture deconstructed in the form of graphic arts, creates paintings that feature the tranquility and beauty of the fragmentation, unplannedness, and blankness, and wins favor with art collectors by embodying in his paintings the strong attachments to Chinese literati painting.
Similarly, Shen creates a conceptual frame where deconstructed texts lie far and near and carry both fictitious and realistic implications. The fact that Shen handles every pause or turn in his paintings with a sense of simplicity, genuineness, and sharpness contributes to the fullness and astuteness of his paintings. Also, his emotionally-driven techniques for creating an illusion of space lend a broad view to the paintings.
The creation of art is always associated with the creator’s life experiences and adventures. The driving force behind the creation tends to come from the ‘countless hardships and perils’ experienced by the creator. The so-called ‘one hundred years/ thirty-six thousand days(2)’ means that one would spend thirty-six thousand days in his/her one-hundred-year life. And who doesn’t experience countless hardships and perils during such a long period of time? Yet, the process of dealing with people and matters naturally breeds some deftness, wisdom, and refinement.
Shen’s abstract paintings are in the form of texts and calligraphy, and the form is also the content of the paintings. The texts he uses are mainly Buddhist scriptures, giving a faint description of hidden and mottled scars while enjoying a revival of power in refinement, which is why his paintings glow in the dark. Shen is seeking a soul that can settle down, a wall which he can lean against, and a pure land where he can rest. His paintings are rich in firmness and strength; they can be looked at closely or on a microcosmic level. The deconstruction of texts and the will to transcribe Buddhist scriptures over and over again allow him to represent construction and reconstruction while leaving faint traces of deconstruction in his artworks.
While living an ascetic life by transcribing Buddhist texts and creating paintings over years, Shen also liberates himself by disclosing metaphysical philosophy through every brush stroke. He makes a silent promise that once he has created a certain number of paintings, he will sell them all for charity. He just doesn’t know when the good timing will be.
In May 2012, with the help of his Myanmarese friends, Shen visited Kam-ar-yama Temple in a remote village at Thanlyin. The temple accommodates more than seven hundred orphans, who were left abandoned due to windstorms, wars, or poverty. Every day, the orphans turned Buddhists are instructed by nuns to read aloud scriptures and develop wisdom by studying hard. Nonetheless, there are inadequate resources for such a large number of orphans, and the temple is in urgent need of help. Recognizing the time is ripe for selling his paintings for charity, Shen decides to take action and donate all the earnings to those orphans. Shen’s compassion, philanthropy, and selflessness are admirable and touching indeed. Hopefully, his wish will be granted, his noble cause achieved, and his beneficence turned into a sustainable force for promoting charity in our world.

(1)This title derives from the line “靜故了群動，空故納萬境(literally meaning with quietude you comprehend all movement; with blankness you take in ten thousand scenes)” of the poem “送参寥師(For Buddhist Master Canliao)” by Su Shi, a writer of Song China.
(2) A quotation from the Shunzhi Emperor of Qing China 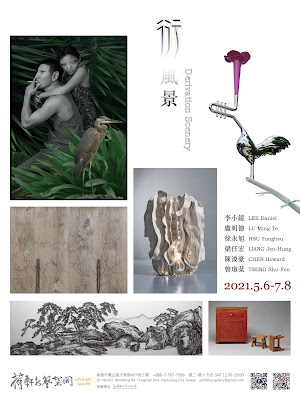